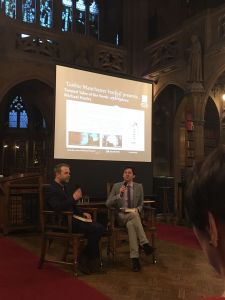 This engaging conversation covered the landscape and writers that inspired Hurley when writing The Loney, Hurley’s approach to writing and some of the key themes that run through his novel. For those not lucky enough to attend, following are my notes on their conversation.

Is there such a thing as ‘northern Gothic’ in literature? Well, if there is, The Loney is it.The Gothic enables a writer to approach the large existential questions such as faith and identity, in an interesting and different way and Hurley does this in The Loney. He explores the difficulties of those experiencing a crisis of faith, using a group of parishioners on their annual Easter pilgrimage to a lonely stretch of the northwest coast. Eerie, strange and haunting, the landscape is as much a character as the parishioners and their priest.  A deeply unsettling, haunting novel, The Loney has at its heart a tension, that between reason and unreason. There is an honesty in Gothic writing, specifically the honesty of arrogant narrators in Gothic; the narrators use their knowledge to combat the horror they are witnessing but there always comes a point when reason cannot comprehend what is happening, or explain it away, and they are overcome by the horror.

Hurley visited the Morecombe Bay area many times as a child, through all its seasons, and the loneliness of this area was one of his inspirations for The Loney. The northern landscape and the weather lends itself to the Gothic; its gloomy, glowering skies are quintessentially Gothic.

Hurley was brought up in the Catholic faith (although lost his faith some time ago); as a child he learnt from his religion that there is another world peopled with spirits, devils and angels. He found many of the tenets of his faith gory, such as transubstantiation, and consequently his novel is soaked in this religious imagery and fervour.

Writers that have inspired Hurley include Charles Maturin and Shirley Jackson. Hurley talked admiringly about the ‘elasticity’ in the worlds in Jackson’s novels; her realities are recognisable but she stretches that reality to something off kilter, not quite right, that acts to unsettle the reader.Some direct literary influences on The Loney include M R James’ Whistle and I’ll come to you, Bram Stoker’s Dracula (some of the novel is set in Whitby, another northern coastal area) and Daphne DuMaurier (Don’t Look Now, The Birds).

It’s very difficult to say any more about The Loney without spoiling it so all i will say is that you should read it! And good news, there is another novel on the way also set in rural Lancashire,in the Bowland Fells, focusing on a small farming community and its local folklore.