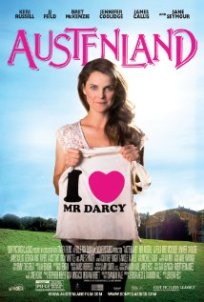 This year was the bicentennial of the publication of Pride & Prejudice and its hero(ine)s still speak as much to women (and men) now as they did then. Love him or hate him, two hundred years on, Mr Darcy is here to stay. As are screen and book interpretations and adaptations of Pride & Prejudice, of which the latest to grace the silver screen is Austenland, possibly the most Meta of interpretations yet (and based on the novel by Shannon Hale).

Keri Russell plays Jane, a modern American woman who has been unlucky in love. Obsessed with Jane Austen’s novels and holding out who she sees as the perfect man (Mr Darcy of course), Jane is struggling to experience real romance in her life as no man ever measures up to her fantasy man. Literally; Jane has a lifesize cardboard cut-out of Colin Firth/Mr Darcy in her regency-decorated apartment (there is a LOT of chintz) and the only man we see visit her flat doesn’t come close to Darcy’s stature!

Eventually in desperation Jane decides to sink her life savings into ‘the romantic experience of a lifetime’ at Austenland in England, a regency themed house party that guarantees the Mr Darcy experience. Unfortunately when she arrives Jane finds out that she has only managed to afford the ‘copper package’, rather than the other two female guests (enthusiastically and hilariously played by Jennifer Coolidge and Georgia King) who are experiencing the ‘platinum package’; this means that Jane is treated as the poor relation of the house party, placed in a plain brown dress with her hair undressed, and introduced to the house party guests as ‘an orphan with no money to her name and taken in as a charitable act’ by the snobbish lady of the house, played superbly by Jane Seymour. As a result, all of the gentlemen with their ten thousand a year pay her no attention at all, in keeping with the mores of the time. And so Jane’s time passes. However, Mr Nobly acts almost nicely towards Jane sometime and there is always the groundsman, Martin, played convincingly by Bret McKenzie who seems very interested in Jane. But who is acting and who is real? Is anything at Austenland real (I am still not sure of the significance of the orange-faced footmen, can anyone enlighten me?!)?

What I enjoyed most about this film was the number of layers in it; you’re the audience watching a film in which actors play actors, playing regency characters. About two-thirds way through the film, the regency characters put on a play, thereby adding another layer. All good fun and some of the best scenes are when Kerri Russell’s character, Jane, steps back from the performance and asks herself what she really wants. Is all romance just a game? Can she really find true love while playing a part?

Does Jane find her Mr Darcy? That would be telling, but what I can say is that you will be thoroughly entertained finding out.